Last week was spring break for our brood, and we hosted our first-ever sleep-over for Kaylin and Karis. To tell the truth, we are very careful about sleepovers, and we have rather strict rules about where our children can go overnight. Therefore, our girls have never had a sleep-over. Our family is good friends with another family that has three girls the ages of my girls; but they attend a different church and school, so we do not see them that much. The girls were able to attend our prayer service on Wednesday night and sleepover so the girls could play together on Thursday. Now, as the  momma hosting the sleep-over, I felt that the girls should have something crafty to do, but I had been very busy leading up to the sleep-over. I also was babysitting that morning, so I wanted something quick ad easy for me to put together. I remembered seeing a pin where they had taken masking tape, taped off the child’s name, and the child then finger-painted over the tape. The tape gets removed later after the paint dries. So that’s what I decided to do for the girls.

Here is Kaylin’s version of the play date:

“I have some really good friends that I don’t get to see often. My mom called their mom, and we got to have a sleepover. They came to church, and then they came home with us. The next morning, we wanted to do a craft, so my mom put some tape on pieces of white cardstock. The tape spelled our names. We finger-painted over the tape; and when it was dry, we took off the tape, and our name was on the paper!”

Here are some pictures of our thrifty and fun activity!

Names are taped off, and painting is ready to commence!

Names are taped off, and painting is ready to commence! 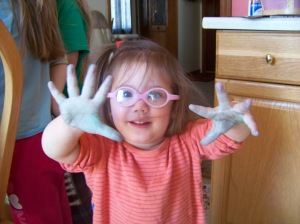 Look at my hands! And this is after we washed them!

Waiting for the paint to dry

Here are their names without the tape

Cost:  For me, $0–I already had all the materials! Yay for thrifty fun!

Today I am going to do a review about Pippi in the South Seas by Astrid Lindgren.

This book, Pippi in the South Seas, is about a hilarious girl named Pippilotta Longstocking. She is a red-headed girl who wears shoes so big she could fit two of her feet in them. Her father, a chief of an island in the South Seas, takes her and her two friends, Tommy and Anika, on a visit to the island of Kurre Kurredutt. They are in a for a big adventure! When Pippi plays marbles using real pearls with the island children, two crooks named Jim and Buck attempt to steal the pearls. Pippi handles them in an unforgettable way! She single-handledly outwits them and throws them into a little boat, and they are happy to escape with their lives. I like reading the Pippi Longstocking books as they are a fun read. The author is very creative.

I told Kaylin to pick any book she wanted to review and to write up a review for today’s blog post. This is what she picked. I thought this was an interesting pick as she read these books probably more than a year ago; and this book, like last week’s book, is one that I read as a child. In fact, this book is the exact book that I read in my much younger days! The cover is off, and the book shows much love (or wear!)  I do remember as a child thinking that these outrageous books were humorous. Pippi can do things that no normal child could ever do; and her actions are so extreme that every child that is reading the book would immediately pick up on that fact. As I flipped quickly through the book tonight, I noticed how often Jim and Buck were said to be cursing. The book never says any curse words; it just said that they were cursing. As a child, I never picked up on that at all. I find it interesting how I read books so differently now that I am an adult compared to how I read them as a child. I do not believe that it was necessary for the author to put in that her villians were continually cursing to make them appear to be “bad guys,” but I still think that the books would be fine for children to read. As I have not read these books recently, I honestly could not say if they teach many moral values. I do remember that Pippi was kind, and that honesty was honored. Have fun reading!

This book is available on Amazon, and probably other websites as well.

We have a whole bunch of my old husband’s t-shirts that were just begging to be used. I had pinned a way to make headbands out of old t-shirts, and so I decided to try making them. They are relatively quick and easy to make. Kaylin especially loves them as she says,

“I have long hair and like to keep it out of my face. Headbands work well, but the hard kind hurt the back of my ears. My mom found out how to make soft headbands out of old    t-shirts on pinterest.”

This is how I made the headbands:

Next, I braided them just like it showed in the above the tutorial link. I did not take pictures of this step, as the other blogger did such a great job taking pictures of the steps and should get credit for the idea. When I got it the right length, I would sew it along the bottom. I would then keep those strips that weren’t used, as many times they were long enough to make another headband.

Kaylin wanted to give one as part of a present for a birthday party, so we made one on our craft day with friends. Since both girls go to the same school, we made it with the school’s colors:  orange, black, and white. After it was made, I tried it on Kaylin’s head to make sure it was the right size before I cut off the extra length. The other ladies at my house thought it was cute to have the long strands hanging down her back, so the long strands were kept! I just cut off some of the length as they had been extremely long.

Yesterday, we had one of our much-looked-forward-to days at our house:  Craft Day! Of course, any day can be craft day, but when it is an “official” craft day at the Doiel house, it means other people come over and do crafts with us. This also means for us that it has to be a day when there is no school, as two of the regulars who come teach school. This past week was Spring Break for my children (even though it was very un-springlike weather), and so Friday was picked to be the “Craft Day!” Four friends, my mom, and my grandma showed up at 9:00 a. m. bearing in their arms their projects and craft paraphernalia. Two of the ladies each wanted to remake a wreath, and one lady decided to work up a pumpkin fall decoration. I had to make a headband out of old T-shirts for part of a birthday present Kaylin had to take that day for a friend’s birthday party. (I will show how I did this on Make-it Mondays post.)

Fun, laughter, and food was all part of the morning. The ladies who brought nothing with them were much in demand to help the others with their decorations. Even grandma was put to work holding the little sweet baby I am babysitting. That was a joy for her and a help to me as I could finish the headband on which I was working.

The children had their own “craft day” coloring on their paper and having fun with stickers.

With all the ladies giving their imput (whether it was asked for or not), the decorations all turned out beautifully. They also cost a fraction of the price they would have cost if they had been bought in the store as most of the objects needed were either in storage or bought at the dollar store. (I wish I would have taken more pictures of the finished products, but I was a little busy with the baby then.)   For me, I look forward to this day as I get these crafty items done that I might not normally take time to do. An added bonus is the joy of friendship–being able to laugh together and having  my spirits lifted by the fellowship of others. If you have a friend or family member with whom you can cook or craft or shop–or whatever you like to do, I would encourage you to work it into your schedule every once in a while. You won’t regret it!

Three of the finished products:

Receive periodic newsletters! Get access to all the Subscriber Freebies ever offered!

Go HERE to sign up to receive an email for periodic newsletter updating you on giveaways, recent posts, affiliate sales, and subscriber information! We will not spam you! Go HERE to see my privacy policy.

Receive an email every day there is a post published! You’ll get the subscriber freebies too!